From inside the code: Camel RouteBuilder and Java DSL

Recently got back from Camel One and now it's time to get back to business. One topic of discussion I wanted to go over quickly is the Camel route builders and the DSL around them. Ever wonder how and why certain Java DSL methods are available in the route builder? For example, to begin a route, you must specify a consumer endpoint which is either push-driven or poll-driven and introduces an Exchange to your camel route. To do this, you use the from() DSL method. Which makes sense within the rest of the route, because you're getting messages/exchanges from an endpoint and then starting your route. But for some of you experienced Camel developers, you'll wonder what exactly you can do after you've created your consumer with the from() method. Well to fully understand that, you must understand a little about how the RouteBuilder API works.

When you define a route with the Java DSL, you start by creating a new class that extends from the org.apache.camel.builder.RouteBuilder abstract class and then override the configure() method and implement a route with the DSL. You start the route with the from() method mentioned above, but where does that method come from? Consider the following UML diagram: 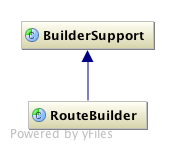 When you extend the RouteBuilder class, you inherit all of its methods as well as the BuilderSupport methods. The RouteBuilder class is where the from() method lives as well as a couple other methods that are "global" to the route such as onException(), errorHandler(...), intercept() etc. The methods in this class are intended to begin a route or configure its exception and error handling. RouteBuilder's parent class, BuilderSupport provides a bunch of methods for building expressions with the ValueBuilder (for body or headers), XPathBuilder (for creating xpath-compliant expressions), SimpleBuilder (camel's built-in expression language), ErrorHandlerBuilder, DeadLetterChannelBuilder and a couple others. These methods can be used throughout the route wherever the appropriate expression is expected. This is why, for example, the simple() method or the xpath() method is available within other DSL methods. See the full list of methods for each class below. Note the methods for each class are cohesive to the class -- meaning they all belong to their respective class for a reason. Those that belong to BuilderSupport are specifically to add commonly used expressions anywhere within the route (thus supporting the building of a route). The methods belonging to RouteBuilder are specific to beginning a route and configuring the global exception/error handling for that route.

Yes, it is important. RouteDefinition is a concrete implementation that represents the beginning of a route definition and is where you begin to add the next steps of your route. In camel, every step of the camel route is represented as a "processor." Out of the box the DSL provides many implementations of endpoints and EIPs to string together your route. Take a look at the class hierarchy. The OptionalIdentifiedDefinition abstract class is around mostly for adding an identifier and description to your route. Not very interesting, but good to know. The ProcessorDefinition class, however, is very interesting as it's the superclass for a RouteDefinition as well as almost every other specialized route definition. This base class is the reason why you have access to the EIP DSL once you've created your consumer endpoint with from(). Take a look at its methods (note, kinda long list): 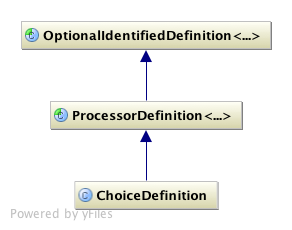 I realize some of these details might be too low level for some people. It is not meant to be a step-by-step guide for using Camel, but more of an overview of the API to help conceptualize why some of the DSL methods are available (or not available) so you can become more comfortable with the DSL.

If someone has anything to add, or comments/questions, I am eager to hear.