Do I Need an API Gateway if I Use a Service Mesh?

This post may not be able to break through the noise around API Gateways and Service Mesh. However, it’s 2020 and there is still abundant confusion around these topics. I have chosen to write this to help bring real concrete explanation to help clarify differences, overlap, and when to use which. Feel free to @ me on twitter (@christianposta) if you feel I’m adding to the confusion, disagree, or wish to buy me a beer (and these are not mutually exclusive reasons).

First disclosure: I work for a company, Solo.io, that is invested in this topic. I mention this ahead of the “your view is biased” reaction. Everyone’s view is biased. But to be sure, I came to work at Solo.io because I want to see these thoughts implemented and brought to market, not the other way around.

Second disclosure: I’m writing a book called “Istio in Action” which is the service mesh with which I’ve spent the most time. The point of view in this article when I discuss “service mesh” is admittedly from an Istio perspective, but I’ll try point out when I refer to service mesh more generically.

Why another blog on this topic?

There is still, however, a palpable confusion in the market.

I also would like to see serious discussion about how people see the trade offs between different approaches. For example, there is overlap in responsibility/advocacy between a service meshes and api gateways. People are confused and overwhelmed with choices.

About a year ago I wrote about the Identity Crisis of the API Gateway which evaluated the differences in API Management, Kubernetes Ingresses, and API Gateways (with associated definitions). At the end of that article, I tried to explain how service mesh fits into the equation, but without enough detail on how they’re different or when to use one or the other. I highly recommend reading that post as in some ways, that’s the “part one” to this post being a “part two”.

I believe the confusion arises because the following:

The last bullet is especially confusing to the discussion.

Gateway describes a load balancer operating at the edge of the mesh receiving incoming or outgoing HTTP/TCP connections.

Aren’t our API’s HTTP? If we can get HTTP requests into the cluster/mesh with Istio’s Gateway (which, btw is built on the amazing Envoy Proxy project), isn’t that sufficient?

The rest of this article will assume Istio and Istio’s Gateway when we say “service mesh”. I’m picking this scenario because it’s the one that best illustrates the overlap and confusion. Other service meshes also have a Gateway, while some don’t have an explicit gateway yet. YMMV.

The first order of business is to recognize the areas where the capabilities of an API Gateway and a service mesh seem to overlap. Both handle application traffic, so overlap should not be surprising. The following listing enumerates some of the overlapping capabilities:

Okay, so they overlap. So do you need one? Both? Neither?

The service mesh operates at a lower level than the API Gateway and on all of the individual services within the architecture. The service mesh gives “more detail” to service clients about the topology of the architecture (client-side load balancing, service discovery, request routing), the resilience mechanisms they should implement (timeouts, retries, circuit breaking), telemetry they should collect (metrics, tracing), and security flows they participate (mTLS, RBAC). All of these implementation details are provided to applications typically by some sidecar process (think Envoy), though they don’t have to. See my talk on the evolution of the service-mesh data plane from ServiceMeshCon.

From the API Identity Crisis article:

Bottom line: service mesh gives more details/fidelity to the services/clients about the implementation of the rest of architecture. 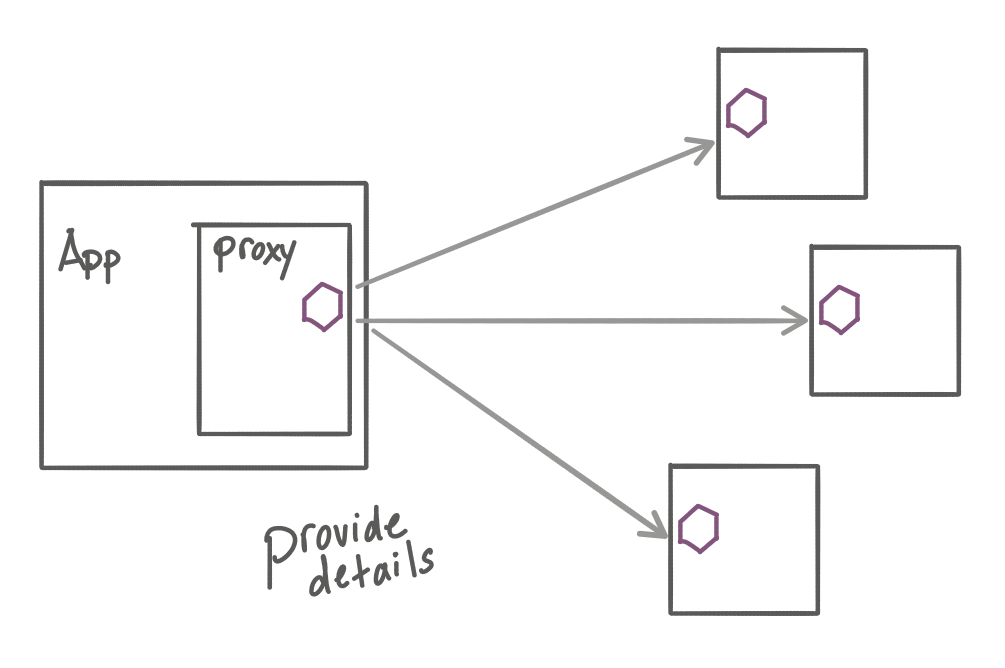 The API Gateway on the other hand serves a different role: “abstract away details” and decouple implementations. The API gateway provides a cohesive abstraction across all of the services in an application architecture – as a whole, while solving some of the edge/boundary problems on behalf of specific APIs. 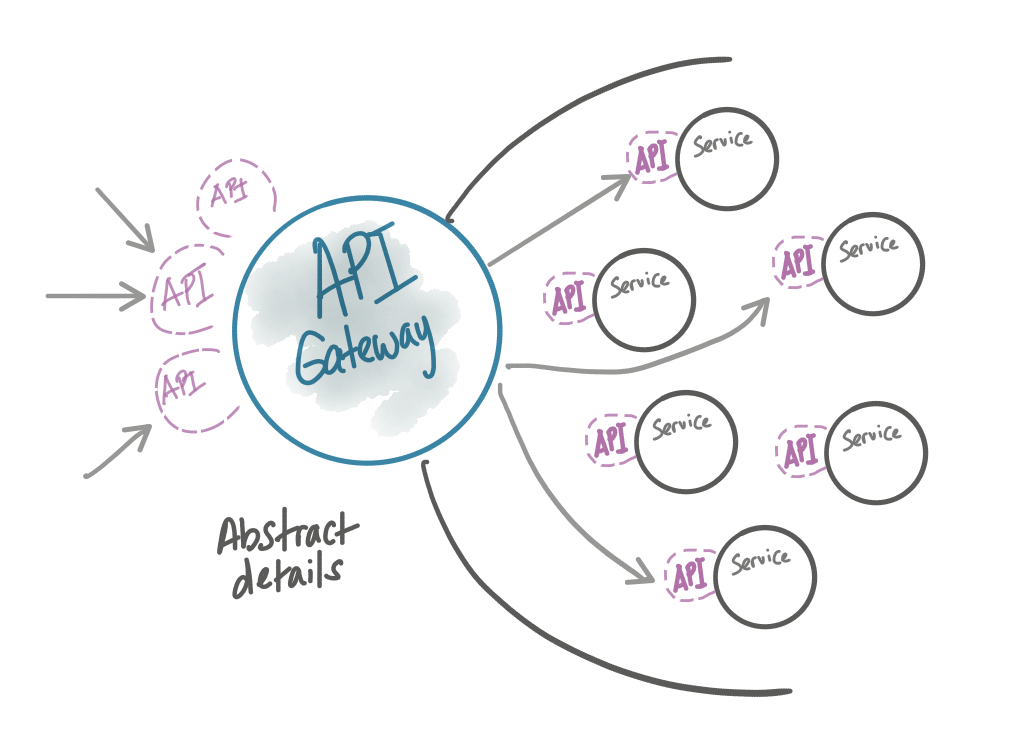 API gateways live above the applications/services regardless of whether a service mesh exists and provides an abstraction to other groups. They do things like aggregate APIs, abstract APIs and expose them differently than they’re implemented, and add more sophisticated zero-trust security policies at the edge based on the user. The issues at the boundary of an application architecture are not the same as those within the boundary. 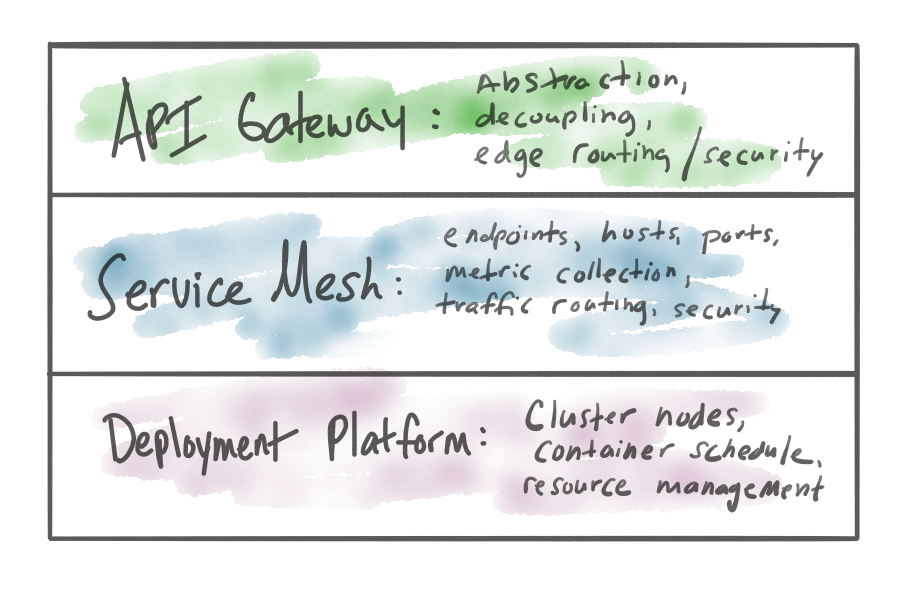 Edge issues are not the same as service-to-service challenges

At the boundary of a microservices/cloud-native architecture, an API Gateway provides three main capabilities that a service mesh does not solve to the same degree:

A core functionality of the API Gateway is to provide a stable API interface to clients outside of the boundary. From Chris Richardson’s Microservices Patterns Book, we could paraphrase the “API Gateway pattern” as:

explicitly simplifying the calling of a group of APIs/microservices

emulate a cohesive API for an “application” for a specific set of users, clients, or consumers.

The key here is the API gateway, when it’s implemented, becomes the API for clients as a single entry point to the application architecture

From a functionality standpoint, what would an API Gateway need to support? And what real-life usecases do enterprises see that would require an API Gateway [where a service mesh isn’t well suited]:

Let’s take a look at each.

As part of exposing an API on an API gateway, you may wish to hide the details of how the backend API is implemented. This could be some combination of changing the shape of the request, removing/adding headers, placing headers into the body or vice versa. This provides a nice decoupling point from clients when backend services are making changes to the API or when clients cannot update as fast as the provider.

Many enterprises have investments into technology like XML over HTTP, SOAP, or JSON over HTTP. They may wish to expose these with a tighter, client-specific API and continue to have interoperability. Additionally, service providers may wish to take advantage of new RPC mechanisms like gRPC or streaming protocols like rSocket.

Transforming requests from upstream services is a vital capability of an API Gateway, but so too is customizing responses coming from the gateway itself. Clients that adopt the API Gateway’s virtual API for request/response/error handling expect the gateway to customize its responses to fit that model as well.

When a client (trusted or nefarious) requests a resource that is not available, or is blocked from going upstream for some reason, it’s best to be able to terminate proxying and respond with a pre-canned response.

There is no one-size fits all proxying expectation. An API Gateway should have the ability to both change the order in which its capabilities get applied (rate limiting, authz/n, routing, transformation, etc) as well as offer a way to debug when things go wrong.

Exposing an abstraction over multiple services often comes with the expectation of mashing up multiple APIs into a single API. Something like GraphQL could fit this bill.

As you can see, providing a powerful decoupling point between clients and provider services involves more than just allowing HTTP traffic into the cluster.

Another important functionality of an API Gateway is that of “governing” what data/requests are allowed into the application architecture and which data/responses are allowed out. This means, the gateway will need deep understanding of the requests coming into the architecture or those requests coming out. For example, a common scenario is Web Application firewalling to prevent SQL injection attacks. Another is “data loss prevention” techniques to prevent SSN or PII to be returned in requests for PCI-DSS/HIPPA/GDPR. The edge is a natural place to help implement these policies.

Again, defining and enforcing these capabilities aren’t as simple as just allowing HTTP traffic into a cluster.

The last major piece of functionality that an API Gateway provides is edge security. This involves challenging users and services that exist outside of the application architecture to provide identity and scope policies so that access to specific services and business functionality can be restricted. This ties into the previous section.

A common example is to be able to tie into OAuth/SSO flows including Open ID Connect. The challenge with these “standards” is that they may not be fully implemented or implemented incorrectly. The API Gateway needs a way to flexibly fit into these environments as well as provide customization.

In many enterprises there are already existing identity/trust/auth mechanisms and a big part of the API Gateway is to be able to integrate natively for backward compatibility. Although new standards like SPIFEE have emerged, it will take a while for enterprises to adopt and in the meantime an API Gateway (even one for applications running on their next-generation architecture) is a hard requirement. Again, you can kind of squint and say this is also related to the transformation/decoupling point made above.

How to go about adopting one/other/both/neither?

In a previous blog I outlined some of the challenges of adopting this type of technology (API Gateways and Service Mesh) and gave some tips on how best to adopt.

Re-iterating here: Start with the edge. It’s a familiar part of the architecture. Picking one that best fits is also something to consider. Assumptions have changed since we’ve introduced cloud infrastructure and cloud-native application architectures. For example, if you’re going to adopt Kubernetes, I would highly recommend considering application networking technology built from the ground up to live in that world (ie, check out Envoy Proxy vs something that’s been lifted and shifted. For example, at Solo.io, we’ve built an open-source project leveraging Envoy called Gloo for this purpose.

Do you need a service mesh? If you’re deploying to a cloud platform, have multiple types of languages/frameworks implementing your workloads, and building a microservices architecture, then you may need one. There are many options. I have done talks on comparing and contrasting various, with my OSCON presentation being the most recent. Feel free to reach out for guidance on which one is best for you.

Yes, API Gateways have an overlap with service mesh in terms of functionality. They may also have an overlap in terms of technology used (e.g., Envoy). Their roles are quite a bit different, however, and understanding this can save you a lot of pain as you deploy your microservices architectures and discover unintended assumptions along the way.